A mom came out into the hall. She told me that her son was a musician and could I come into the room and play for him? Jason was lying lethargically in bed, taking his regiment of therapy, very sleepy and very quiet.

His mom took out her phone to show me videos of Jason playing with his band. He was a rocker.We started to talk about his music and what kind of guitars he has… and he began to sit up in bed, eyes opening wider, smiling. Then I asked him if he would like to show me a few licks on my guitar. When he reached out to grab it, the tubes pulled on his arms and he couldn’t get them around the guitar. This instrument was just too large for him to hold. I told Jason that I would be back in just 5 minutes. I ran downstairs and brought back my much smaller “back packer” (a guitar with full neck but almost no body). Jason smiled and grabbed it from me with a certain smirk on his face. I said “let’s see what you got…” so I started playing “While My Guitar Gently Weeps” by George Harrison. I said to Jason, do you know the tune? He said that he heard it before (Jason is 15). So I kicked it off, and to my amazement… this is what happened… it was a miracle that Mom shot this 30 second video and gave us a release to use it one day in the future. This was about 2 years ago now… and the event that led to putting a smaller instrument into the arms of a hospitalized child.

Here are some pictures from a “jam session” that we organized between two incredibly talented patients, Brendon and Drequan…

My name is Kendra Jennings. I am 17 and suffer from a very rare disease. I spend most of my time in the hospital…

Bean strikes again! A little explanation is in order here. Josephine was deemed severe to profoundly deaf in both ears shortly after she was born…

As I sit here typing this, Eva is upstairs practicing her ukulele. She has become devoted to the instrument. She practices every day, sometimes for hours… 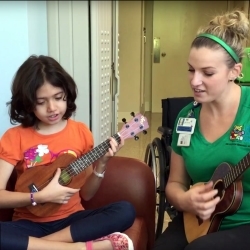 Isa wrote this song with me last week, prior to regaining her speech. She was struggling to walk, stand, and talk without pain and discomfort…

Jenny’s love of music and her kindness to others was quite evident to her many friends and family. Through the…

My husband, Remy Barthe, playing uke for my daughter (9mths) Josephine. She’s been hearing it since I was 3mths pregnant, through almost 3mths in the NICU…

Meet the newest UKC Kid from Children’s Hospital of Orange County. She is an 8-year old girl who loves singing Disney Songs, and with her new uke, she is READY TO ROCK!

Ryder T. is our newest UKC Kid Ambassador and he is raising funds to help other kids in the hospital. Read how Ryder got involved. 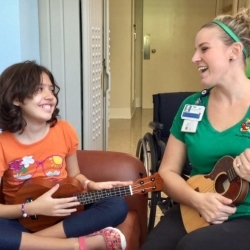 This patient is a young 16 year old girl who is facing the difficult situation and reality of a new chronic diagnosis. What makes this girl stand out is…