It’s a cool October evening and my husband and I are heading out to a school Halloween party with Charlotte. Everything is going well but her bruises are getting worse. She’s a kid though and probably was playing rough at school that day. No big deal, right? Kids play, kids get bruises, kids move on.

So, we head off to a funeral out of town for a few days after the Halloween party. Her nose starts bleeding and she’s waking up with blood caked on her face. Well, it’s dry where we are so I’ll just grab some saline spray and tissues and then see the doctor when we get back. Nosebleeds happen right? She probably was picking it and was just a little too aggressive – kids are like that right?

We come back home a day later and she’s exhausted, bruised all over, nose bleeding, legs hurting, and now has petechiae on her legs and torso so I get her to the pediatrician thinking he will have an answer. His answer? Get to the hospital…NOW.

After some bloodwork and a very long wait in the ER, the hematologist tells us that Charlotte has almost no cells being produced from her bone marrow. She thinks it’s probably ITP but keeps us for treatment to be sure.

The next day, Charlotte isn’t any better and now she has to undergo a bone marrow biopsy to find out what is going on. Several hours later, it’s confirmed – Aplastic Anemia. My heart sank. I was elated because it wasn’t leukemia or another cancer, but this was a beast I wasn’t prepared for. I struggle between being a mom and a nurse because all I want to do is protect my daughter but I know what she’s about to go through.

Aplastic Anemia is a condition where Charlotte’s bone marrow just decided it’s not going to make the cells she needs to live. Her platelets were at 1,000 – normal is about 350,000. Her white blood cell count was 0.1 – normal is around 5-10. Her hemoglobin was about 7 – normal is around 14.

So, the journey begins. Pokes, prods, blood products, blood and lately infusions, X-rays, scans, IV fluids, antibiotics, pills, central line placement, and the kitchen sink. For a kid who has really never been sick, this is a lot. For me, as a nurse, I know what needs to be done and I quickly switch to “nurse mode” so I don’t have to break down and cry in “mom mode” because my child is critically ill. I’m the strong one, the fixer, and there isn’t anything I can do except to reassure her that she’s going to be okay.

So, I follow her labs closely, talk with her doctors, manage her symptoms, give her the meds, and just comfort her any way I can. A day or so later, Charlotte starts to get very agitated and upset because she can’t sleep and her legs hurt so badly that she’s crying uncontrollably. The nurse asks for some medication to help calm her down but it has the opposite effect. Charlotte starts getting more and more upset and losing control and all I can do is rock her and cry right along with her. This goes on for days and days, what seems like forever.

Then, somehow, we get a referral for music therapy. It’s not uncommon in hospitals, especially for kids, to have multiple providers – some medical and some not. There are all kinds of therapy that don’t involve sitting on a couch. Pediatric hospitals are known for art therapy, music therapy, school tutoring, and anything else a growing kid could need.

Well, Kelli is what Charlotte needed right then. In walks this music therapist and Charlotte is shy, as usual. She’s afraid of the doctors and nurses because, in a short time, she’s been through what most won’t (and shouldn’t) experience in a lifetime. Kelli just sits down with her like she’s known Charlotte forever and they start talking about princesses and Disney movies and then they watch part of a movie together. No expectations, no deep conversation, not even an instrument was brought out – but the connection was made.

The next day, Kelli comes back and Charlotte lights up ready to be social – something that hadn’t happened up to this point. This time, she’s ready to sing a little and play some of the instruments Kelli has with her. A drum, keyboard, a ukulele, and several other instruments that I hadn’t even seen before.

This goes on throughout the course of our stay and Charlotte becomes more and more comfortable with things going on around her. We had more visits and stays in the hospital for more treatment and Kelli was always there.

At one point, Charlotte needs a procedure that requires sedation. So, Child Life Services comes in and goes through everything that is about to happen with her. Thor, the beautiful black lab therapy dog, makes a visit to help calm her down and show her that the things they’ll be using really aren’t that scary. Once we get down for the procedure, Charlotte starts to get a bit nervous, and so do I. She’s distracted by games on an iPad that Child Life brought and some conversation I’m having with her, but then in walks Kelli. Kelli starts to play on her ukulele a bit and they sing some fun songs that Charlotte knows. Before we know, it’s time for Charlotte to go into the OR.

What happened next will stick in my mind forever. Anesthesia comes in and gives Charlotte a little medicine to help ease her anxiety, but it doesn’t really work. So, Kelli starts to play some of Charlotte’s favorite Disney songs. They’re singing and laughing and playing together and then the entire OR and anesthesia staff join in singing! They’re all wheeling Charlotte into her procedure singing “Part of Your World” from The Little Mermaid! Are you serious? This is really a thing? I’m standing there crying because I’m scared for Charlotte but also so incredibly touched that all these people, led by Kelli, are doing everything they can to make Charlotte more comfortable.

After the procedure we’re allowed to go see Charlotte in recovery. The nurse there said she heard about the whole thing and is amazed at how calm Charlotte was before and after her procedure. The whole team even requested that the Music Therapists come down for procedures more often because it was so incredibly good for Charlotte and she had no anxiety about going through the procedure.

Kelli comes into recovery a few minutes later and gives Charlotte her very first ukulele. It’s a cute watermelon ukulele and Charlotte has the most beautiful smile when she received it. Here we are, in the middle of a medical crisis, in the recovery unit after a procedure, and all it takes to calm Charlotte down was some of her favorite music. It wasn’t medication, it was music. The only side effect? Happiness.

I can’t lie, it calms me down too. As a parent, one of the worst feelings I have had is seeing my child sick and having absolutely no way to fix it. Aplastic Anemia isn’t something that you fix with a pill. It’s been almost three years since Charlotte’s diagnosis and we are still fighting it. There are ups and downs and there are things we deal with that I never thought would happen to my child, to my family. Through it all, Kelli was there and she’s still there today, helping us all feel more comfortable with all of the overwhelming things that happen in the hospital.

Charlotte still has that ukulele today and is still active with the Ukulele Kids Club. It literally saved her life and my sanity. Without the UKC and Kelli, the journey would have been infinitely more difficult and we probably would have had worse outcomes. Anxiety and depression are real side effects of being diagnosed with something life-altering and medication isn’t always the answer. Nobody wants to be poked with needles and kept in the hospital for days or weeks on end, least of all a young girl who just wanted to trick or treat with family – not end up in the hospital.

I cannot say enough good things about Kelli and the UKC and all they have done for us and what they continue to do for my family. Kelli turned a horrible situation into something more manageable just by binging music and joy into a room filled with anxiety and dread.

2022tue06dec5:30 pmIntro To Ukulele (For Kids 6-12)Lesson 5: Holiday/End of the Year celebration with Olivia Bickford 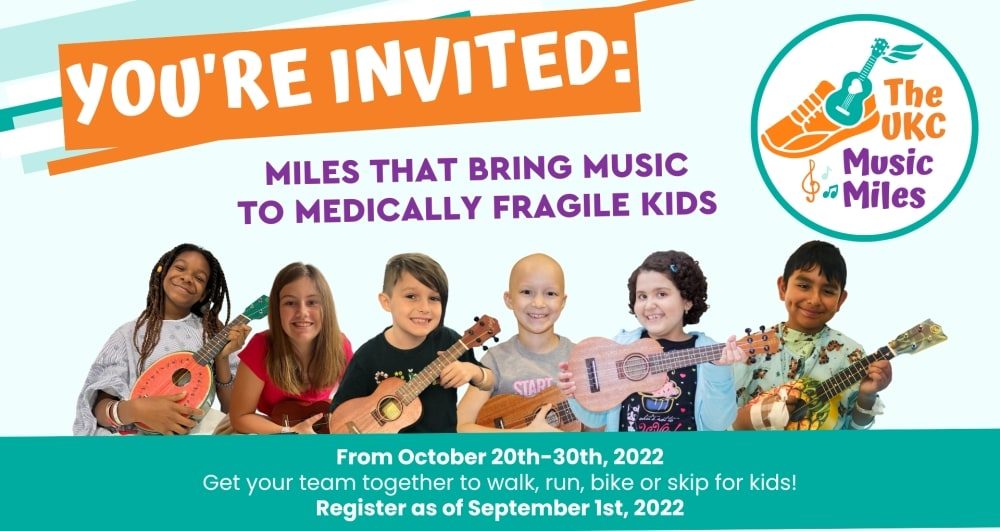