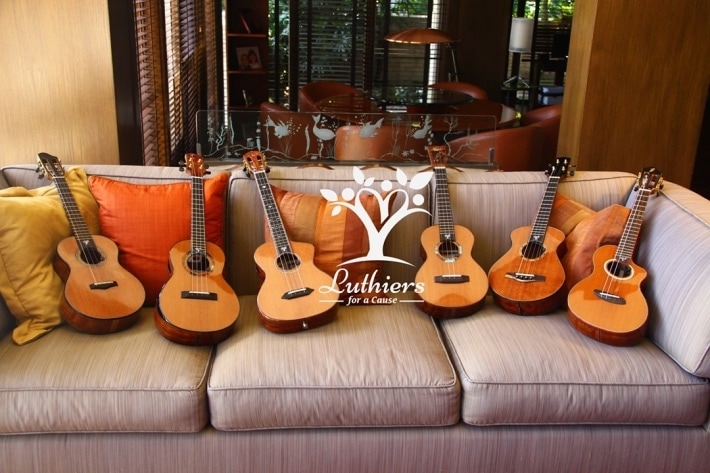 Over the past year or so, we have regularly mentioned a very meaningful organization, Luthiers for a Cause. This is so much more than an organization: it is a group of individuals, art, soul and a spirit of giving, all at the same time. This positive energy and force for good has kept the Ukulele Kids Club going at a time of growth and change. It’s so important, we thought we should share the story in full, in one place.

Luthiers for a Cause is, as the name suggests, a collective of master craftsmen and women of stringed instruments, who want to give back to the community.

The group initially grew from a conversation between builders and ukulele enthusiasts around a question: How important to the tone of an instrument is the wood used in its construction? This is one of the mysteries of the stringed instrument world, and a group of six distinguished luthiers eventually came together to answer this question by building six distinct ukuleles from two legendary cuts of wood. The project was called Voice of The Luthier.

A team including LFAC co-founders and ukulele enthusiasts Eddie Monnier and Patchen Uchiyama, and Corrie Woods of Lichty Guitars made the project a reality. In addition to gathering the cadre of world-class luthiers, the core team sourced the woods, components, and accessories to create a complete and uniform kit for each ukulele. After extensive research, they also designated the charity that would benefit from the auction of these unique instruments; we are forever grateful that they chose Ukulele Kids Club.

The result of The Voice of the Luthier is a set of six beautiful, precisely crafted tenor ukuleles, which ultimately sold as a set for more than $100,000, with proceeds going to The Ukulele Kids Club. (The full set of six ukes is shown in the photos below.) The six builders contributed their world-class talent to the immeasurable value of the entire set of instruments. The winning bidders are a South Florida couple who appreciate ukulele instruments and music, and are passionate about music therapy. They plan to keep the instruments together as a set, as a fitting tribute to the artistry and generosity of the six luthiers.

The luthiers who took part in the project include: Steve Grimes of Hawaii; Beau Hannam of Colorado; John Kinnard of Southern California; Jay Lichty of North Carolina; Jake Maclay (Hive Ukueles) of West Virginia; and Joji Yoshida in Japan.

At the heart of The Voice of the Luthier project lies the wood used to build the instruments. First, it’s important to understand that there can be considerable variability in a wood’s characteristics even from within the same tree. So, it was absolutely essential that the wood used by each luthier be not only from the same particular tree, but also from the same part of the tree.

There are two types of wood used, one for the back and sides, and one for the soundboard. A one-of-a-kind Honduran mahogany tree (so famous, it’s known simply as “The Tree”) was used for the back and sides of each ukulele. The Tree has a unique grain and appearance that has never been found in another Honduran mahogany tree, so it is highly prized for its rarity and beauty. The soundboards were all created from Lucky Strike Redwood, a legendary tree that fell during a storm and air-dried over time while spanned over a ravine. The resulting strength-to-weight ratio yielded a soundboard that uniquely blends the best attributes of both redwood and spruce. With their material and environmental conditioning, each of these pieces of wood has attained a cult status among luthiers and instrument aficionados alike, for their inimitable sound, integrity and beauty.

In addition to the luthiers, Rodgers Tuning Machines contributed artisan-engraved tuners and world-renowned inlay artist Harvey Leach inlaid the Luthiers for a Cause logo on the fretboard of each instrument. Oahu Cases contributed leather-wrapped fiberglass cases for the ultimate in instrument protection.

To learn more, including seeing and hearing the instruments, go to the Luthiers for a Cause website.

The Ukulele Kids Club is a 501(c)3 non-profit whose mission is to transform lives through music. We harness the power of music to improve the well-being of children and families around the world. Through ukuleles and the support of music therapy, we give the gift of music for life.