A 20-year-old man is celebrating the gift of life after receiving a liver transplant but that’s not the only thing that saved him.

Angel Lopez says music also saved him and on Tuesday he performed a concert at Holtz Children’sHospital as a thank you.

Angel did make his mother proud  and his dad, siblings and doctors  following his transplant surgery, just a month ago.

“It brings a great joy.. not only for the family for my son too that he can perform for the doctors and everyone involved in the process to make this possible,” said Angel’s dad Raul Lopez.

He was diagnosed with cirosis and at 11-years old he needed a new liver. Seven years later, there was a match.

“I was grateful it came through and I was really blessed,” said Angel.

As for his music , Angel’s been rapping for 9 years but he found another music to heal him while he was waiting for a liver.

In a healing through music program at Holtz, Lopez learned the Ukele in a month.

“So it gave him something to focus on and work towards and give him a sense of accomplishment,” said Music therapist Stephanie Epstein.

Lopez and his family have dealt with lifesaving surgeries with all of the siblings. His brother had a debilitating vein disease in his leg. His sister, a brain tumor and his other sister who wasn’t there had a liver transplant too. The issues stem from a genetic family issue that they’ve learned to deal with…in one way.

“There are times we thought we can’t do this anymore.. but then we see their love for life. They want to live and make their dreams come true and how can you not support them,” said Angel’s Mom Lidia Lopez.

Now, Angel is back up again and performing with his family at church. He wants to pursue his love of music. His family, doctors and everyone he knows he will. 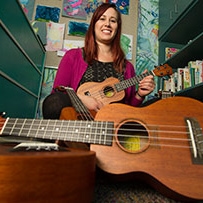